Posted on December 8, 2012 by beckyajohnson

Recently I discovered the wonders of Israeli Couscous (aka pearl couscous). I’d received a free product coupon from Bob’s Red Mill as an early Christmas present, and after visiting my local grocery store I exchanged it for the product I thought would be the most unique to try — Tri-color Pearl Couscous. However, when I brought it home I wondered what I was supposed to do with it.

A web search uncovered dozens of recipes involving Israeli Couscous, which emphasized that once again I am a late-comer to a growing trend. This past week I turned my bag of couscous into 3 separate recipes, which turned out spectacularly because they are each: a) made in under 30 minutes of active prep time; b) complete meals in one dish; c) less than $10 to prepare; d) great as leftovers; e) healthy; f) delicious.

Exhibit A is Tricolor Pearl Couscous with Pesto & Vegetables. The simple basil pesto may be made in either a blender or food processor before it is tossed with the cooked couscous, zucchini and cherry tomatoes. We grated our zucchini with a cheese grater and used quartered grape tomatoes rather than cherry tomatoes. The recipe can also be easily made vegan by omitting the parmesan cheese from the pesto. On day one, we served this with a side of sautéed buttered shrimp. On day two, I had the leftovers with 1/5 of a whole wheat baguette and some rather addictive herb brie cheese dip I picked up at Trader Joe’s. 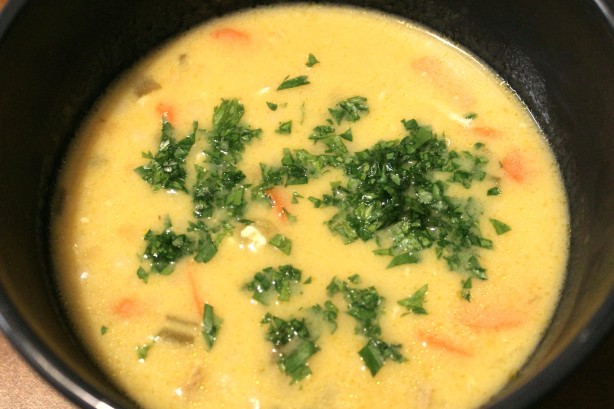 Exhibit B is Greek Lemon and Chicken Soup (aka Avgolemono). This soup traditionally contains long grain rice, but I substituted the couscous for the rice, which worked out quite well. Whisking in 2 eggs just prior to serving gives this soup a similar consistency to the Chinese Egg Drop Soup. This is the Greek version of Chicken Noodle Soup, and since I’ve been fighing off a cold/flu for the past week, I appreciated its healing properties.

Exhibit C is Couscous Tabbouleh Salad, which substitutes couscous for the traditional bulgar wheat. I added leftover grape tomatoes to make this recipe more colorful, and slightly deviated from the recipe by using equal parts parsley and mint (I love mint). This is another recipe that could easily be made vegan by omitting the feta cheese. I also think kalamata olives would make a nice addition.