Posted on December 9, 2013 by beckyajohnson

Has it really been 3 months since my last blog post? This fall has really flown by, and several times I thought about writing a blog post update, but never got around to it. Lately I have been working 3 part-time jobs (which translates to working 6-7 days per week), while taking a full-time load of college courses towards a dietetics degree (which translates to not reading any “fun” books aside from college textbooks). That aside, here is a run-down of a few of my favorite fall projects. 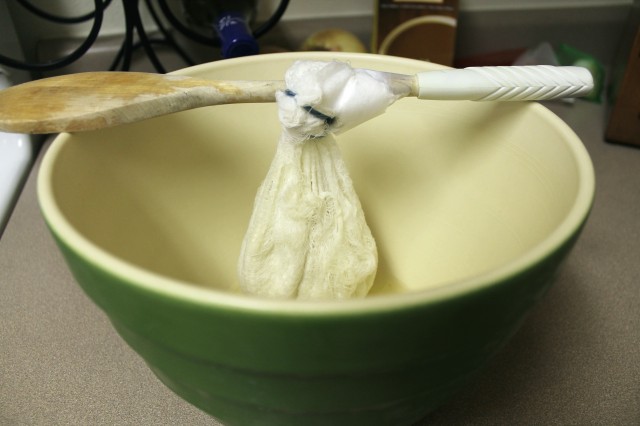 Homemade Labneh: I attended my first mixer for registered dietitians and dietetic students this September — a potluck wine social — and was looking for an impressive appetizer to bring along that would be both healthy and tasty. Labneh is a traditional Mediterranean/Middle Eastern spread made with Greek yogurt. Although is takes 4 days to make, the active time is actually only about 20 minutes.

You simply combine 2 cups of full-fat Greek-style yogurt, 2 teaspoons sea salt and 1 teaspoon of black pepper in a bowl. Line another large bowl with a cheese cloth or piece of muslin, spoon the mixture into the center, fold the corners together and tie to a wooden kitchen spoon. Leave the labneh like this in the fridge for 3 days, allowing any liquid to drain out and a ball to form.

Next, roll the yogurt ball in a mixture of 1 tablespoon of oregano and 2 teaspoons of thyme. Place in a pint-sized mason jar with 1 1/3 cups olive oil and 1 bay leaf and leave in the fridge 1 more day.

Serve at room temperature. For the wine social, I brought the labneh on a standard chips and dip platter, with a  sliced, locally-baked whole wheat baguette and celery sticks to spread the labneh onto. The spread was one of the biggest hits of the party, and the RD crowd preferred the bread far more than the celery. It’s all about balance!

Apple Asiago Pie: I made this pie for Thanksgiving and it was a big hit. There’s not much added sugar, so the pie is not overly sweet, and the addition of thyme, black pepper and asiago cheese adds a nice twist. The recipe comes from one of my favorite cookbooks, Simply Organic. I haven’t made a recipe out of this book I didn’t like.

Mixed Media Paper Witch on Canvas: I took this art class on a rare Saturday morning I didn’t have to work in late October. I am a huge fan of Halloween in general, in addition to October 31st being my wedding anniversary. This collage is something I think I’ll leave up year-round. The class was taught by Katrina of The Paper Parrot, who sells paper crafting kits and offers online crafting tutorials through her website.

Lion Country Afghan: This was my big craft project of the summer because, who doesn’t need a 6-foot by 10-foot hand-knit map of the United States on their living room wall? I used this free pattern from Lion Brand Yarns. The pattern is geared toward advanced knitters, and it took me over 100 hours to make. I bought all of the recommended yarn for the pattern from Lion Brand, and since so many colors were involved, I have a ton of yarn left over. So if you would like to make your very own hand-knit map of the United States, send me an e-mail and I will sell it to you at a heavily discounted price.

This entry was posted in DIY, Recipes and tagged appetizers, arts and crafts, fall recipes, knitting, pies. Bookmark the permalink.