A Brilliant Novel in the Works

Posted on November 29, 2012 by beckyajohnson

Recently, my husband and I joined a book marketing meet-up in Portland, hosted by book marketing specialist The Neo Com Group. At the first meet-up we attended, the guest speaker was Portland writer Yuvi Zalkow. Zalkow’s debut work A Brilliant Novel in the Works came out earlier this year. In addition to marketing himself as a failed writer, schmo and shame-filled Jew, he achieved accidental marketing success through his I’m a Failed Writer Video Series.  He also has a rather funny book trailer, in which he may or may not appear standing on his desk in his underwear. 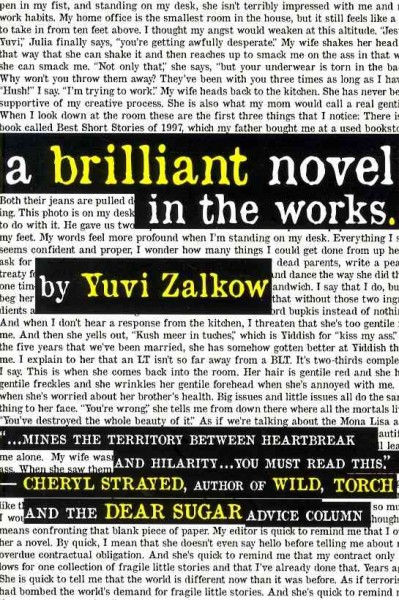 At the end of the meet-up session, Yuvi randomly gave away one of his books, and I was lucky enough to win. Retrospectively, I say “lucky” because this book was one of the most enjoyable reads I’ve had in a few months (and I read at least a half-dozen books a month).

Central to A Brilliant Novel in the Works is a failed writer, also by the name of Yuvi, and with many other characteristics shared by the actual author (he lives in Portland, is originally from Atlanta, is Jewish, a writer, etc.) Yuvi’s editor has demanded a respectable novel from her client, one that Yuvi cannot deliver. He spends countless hours standing on top of his desk in his underwear, stalking a Palestinian who has recently lost his father, and commiserating with his brother-in-law (who is suffering from ulcerative colitis) — all while attempting to add something original to his story. The story is laid out in short chapters interspersed with italicized interludes that oftentimes vaguely relate to the story.

For writers and aspiring writers who have struggled to simply get words on paper, this is a fun read. I found myself laughing out loud more than a handful of times. This book would also likely be enjoyed by those who like darker fiction, and those who either find enjoyment in or a connection with others’ self-deprecation.

But this book isn’t for everyone. For example, I’d calculate that at least 1/5 of the story is directly or indirectly about poop. If you don’t find humor in that, you might want to pass on this. Also, the author deals with uncomfortable subjects, such as cutting yourself for pleasure.

For those who are curious about what a story about “one kinky erection, one impossible colonoscopy, one missing prostate, some leather restraints, a whole mess of pianos, one ridiculous story about Uranus, a deceptive napkin, no shortage of kahkee and schmeckel references, a Palestinian in mourning, and even sex with Julia” (page 233) might entail, you might want to check this one out.

4 Responses to A Brilliant Novel in the Works