For my birthday this year, my husband vowed to take a day off from writing and go with me on an adventure of my choosing. Since nice weather was in the forecast after a long rainy spell, I opted to do Portland’s 4T Trail, aptly named because it uses 4 modes of transportation (trail, tram, trolley and train) to explore the southwest quadrant of Portland.

Since we live close to a MAX train station in Hillsboro, we decided to invest in an all-day public transportation pass for $5 each, as it would grant us access to both the train and trolley. You can technically begin the trail at any of the four modes of transport and do it either clockwise or counterclockwise. We started with the trail portion of the journey beginning at the Oregon Zoo MAX Station.

The 4T Trail was one of the best-marked trails I have ever been on, with well placed brown guideposts on the urban portions of the trail and green signs to help you navigate the forest trails. Yet I was still glad I had printed directions to bring with me, as it was slightly confusing in a few places.

For example, the trailhead for the forested portion of the Oregon Zoo to Oregon Health Sciences University (OHSU) hiking trail oddly begins next to the freeway on ramp of Highway 26. Luckily, the cars were willing to yield to pedestrians. 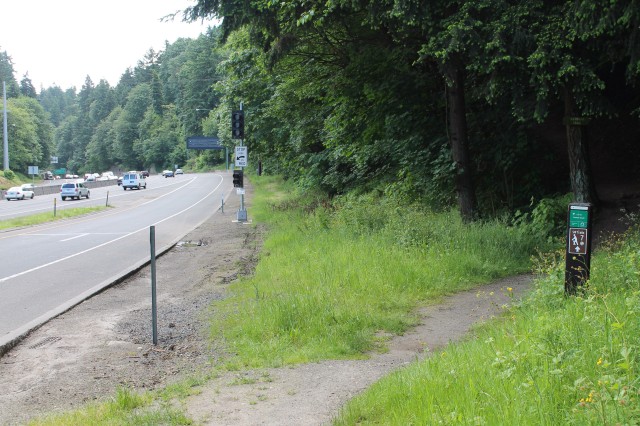 The first portion of the trail follows the 40-mile Marquam Loop Trail, which circumnavigates around the entire city of Portland. We walked only a 1.3 mile portion of the trail, along a gradual incline, to Council Crest — the highest elevation in Portland at 1,073 feet. As it was a partially cloudy day, we were unable to catch a glimpse of Mount Hood, although we had nice views both looking back toward the cities of Beaverton and Hillsboro and of the city of Portland itself.

From Council Crest, hikers can choose to take either the longer, forested route (along the Marquam and Connor trails) that has an additional 300-foot elevation gain just prior to arriving at OHSU, or the shorter urban route that is about a half-mile less with no additional elevation gain. We opted for the longer, scenic route. The next portion of the trail was a 1.7 mile, mostly downhill segment to the Marquam Shelter.

The last portion of the hike was also the most strenuous — 0.6 miles of switchbacks up to the OHSU campus. 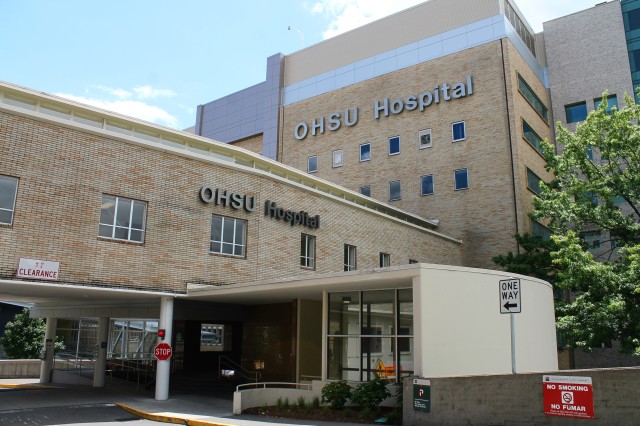 Here the trail actually cuts through the hospital (or our interpretation of it did), which was a good thing because we had access to restrooms and drinking fountains for the first time in 2 hours. The tram station at OHSU also surprisingly had better views of the city of Portland than at Council Crest Park.

Since we rode the tram downhill, we got to ride for free. Otherwise, it is $4 per person uphill or roundtrip. 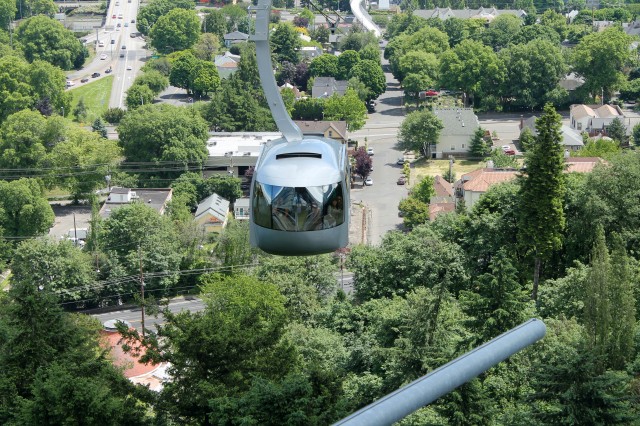 Immediately after exiting the tram station, a trolley arrived. 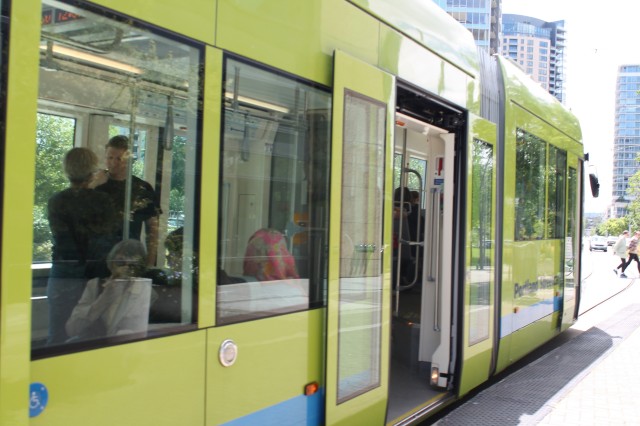 The trolley portion of our journey wasn’t as exciting for me because it was very similar to the MAX train — which I ride all the time — only slower and with more frequent stops. However, I did find it slightly funny that each trolley station is sponsored by a different local business, which they boldly announce as you approach each stop. We exited the trolley at the Central Library stop, which was sponsored by the Julie Lawrence Yoga Center.

By this time, we were both really hungry, and fortunately there are ample dining options to choose from in downtown Portland. We spotted the colorful Mayas Taqueria across the street from the trolley station and headed there for a late lunch.

I devoured a ceviche taco salad and a pint of Dos Equis Amber Ale, while my husband chowed down on Nachos Grande and a pint of Negro Modelo. ¡Muy delicioso!

After lunch, we boarded the MAX train at SW 10th & Morrison and headed back to Hillsboro — the final “T” of our journey.