For the past week I have been in Vienna, Austria participating in events associated with the XVIII International AIDS Conference. The purpose of my trip has been focused on work – contributing a few blog postings to the Ecumenical Media Team’s coverage, helping to staff the Multi-Faith Networking Zone in the Global Village at the conference, and presenting the findings of my most recent research in a press conference today. Work aside, here is a (partially) illustrated account of my time in Vienna.

My first night in Vienna, I joined members of the Ecumenical Media Team, Ecumenical Advocacy Alliance staff, and Multi-Faith Working Group members for dinner at Wieden Brau near Karlsplatz. For dinner, I had the equivalent of a half-pint of Marzen microbrew beer, potato pancakes with sour cream, and a green salad. I love that beer comes in multiple sizes in Vienna – from 0.2 liters (less than half a pint) to 1.0 liters (more than 2 pints in one glass). The food here is largely fried, and I can’t figure out how most Viennese are so skinny! Maybe because they walk everywhere?

Friday and Saturday were incredibly hot and humid in Vienna. Unfortunately, neither my hotel nor the Technical University where the Multi-Faith Pre-Conference were held were air conditioned. By lunch time it had started to rain, and I wandered outside to explore the area architecture. 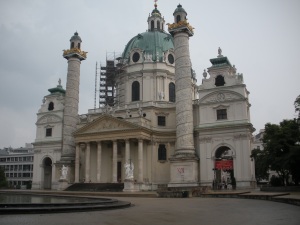 For a few minutes, I enjoyed this man playing the accordion in Karlsplatz public square. I was so moved, that I gave him my spare change. Too bad I also gave him the money I was supposed to use for public transport that evening and had to borrow from a colleague.

Later, I went down to the Messe Prater Conference Centre to register for the conference. Upon checking in, one gets a conference bag filled with about a tree’s worth of paper materials and a few cool things. When I got back to the hotel, I divided my loot into piles of things to toss and things to keep. Fortunately, this year they had a recycle bin. The few cool things included a flash drive, highlighter/tri-lighter, small purse, condom pin, and the official conference free condoms. Too bad I didn’t bother to save the official condoms of the last International AIDS Conferences I attended in Mexico City and Toronto, as each year there is a new design and I could have quite a collection by now.

Sunday was spent helping my colleagues set up the Multi-Faith Networking Zone at the Global Village. I did manage to have some free time on Monday morning to explore both the Global Village and Exhibition Hall on my own. Since this was my third conference, I was less concerned about attending sessions in my free time (I could always read the research findings at a later time) and more concerned with networking and in general experiencing the conference culture.

The Global Village is the community space, open to people who have not necessarily paid the 800 euros to attend the conference. Networking zones are spaces for gathering and information sharing, films are screened, and NGOs sell handicrafts from around the world. Some of the highlights include:

In contrast, the Exhibition Hall is for conference delegates only and primarily showcases exhibits from pharmaceutical companies, the biomedical industry, and governmental programs. A long queue formed in front on the Bristol-Myers-Squibb exhibit, not to talk to industry reps about why the high costs of their drugs and high staff salaries serve as a major barrier for universal access to AIDS drugs, but to receive free coffee, juice and cookies from smiling young Austrian women. The pharma reps, sadly, were nowhere to be found.

A few NGOs could afford the high cost of exhibiting here, and I must give props to the Women ARISE exhibit as one of the most creative. Twice daily, delegates could gather at the booth to play games like ‘Pin the Clit on the Vulva,’ and the winner’s prize was this cool, anatomically-correct puppet.

The UNFPA-supported Condomize campaign had a large presence in both the Global Village and the hallway of the main conference venue. At the conference, they had the goal to distribute 1 million condoms. Now, I must vent on a little pet peeve of mine. While condoms are distributed in abundance at this conference – I probably had over a dozen handed to me while not seeking them on my own – people at risk for HIV in low-income countries have limited access to them. When I was in Uganda in 2008, I believe the figure was 3 condoms per adult male per year. I am not opposed to condom distribution at conferences, but I do have a problem when thousands of condoms are wasted on decorations such as these: 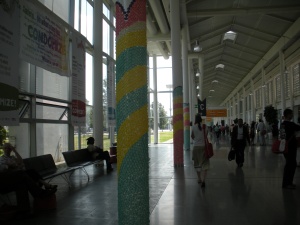 These poles were actually decorated with condoms.

However, the Condomize campaign did give out the best free t-shirts throughout the entire conference.

Tuesday afternoon, I went on an engagement tour to SOPHIE, an organization that provides counseling, social support, and German and self-defense classes to female sex workers in Vienna. Prostitution is regulated in Austria, meaning that female sex workers can work legally if they register at the local police department. They are considered ‘self-employed’ and required to pay taxes, pay into the national health insurance scheme, undergo a weekly medical check-up for STDs, and have an HIV-test every 3 months. If they are found HIV-positive, they are no longer permitted to work as sex workers, although there are some rumblings this should change now that research shows anti-retroviral treatment for HIV-positive people is an effective way to prevent new infections.

Wikipedia tells a different story of sex work in Austria in terms of human trafficking, but the SOPHIE staff member who spoke to our group indicated that most of the clients they serve are working in the sex work industry voluntarily. Most sex workers in Vienna come from the European Union countries in Eastern Europe – especially Hungary, Bulgaria and Romania – and thus have a legal right to work in Austria. One recent sex worker from Hungary who came to SOPHIE’s office had a master’s degree and had been recently laid off from her job. Her friend had experience as a sex worker, and it is known to be good money.

I am always impressed with sex worker advocacy at these conference, and yesterday they held a rally throughout the conference venue, protesting how US Government funding of HIV and AIDS programs is detrimental to sex workers. The red umbrella is an international symbol of solidarity with sex workers and standing up to violence against sex workers.

Last night I had planned to attend the Multi-Faith Prayer Gathering at Votivkirche and the Human Rights March and Rally, but I was feeling extremely tired and in need of a beer. Instead, I ate dinner near my hotel at a little side-walk cafe called Restaurant Ausgarten. Dinner consisted of an Austrian lager (thankfully European restaurants generally serve beer in aspecial glass for each featured beer), an excellent mixed salad, Serbian style pike perch lightly fried and served with a gravy, and roasted potatoes. 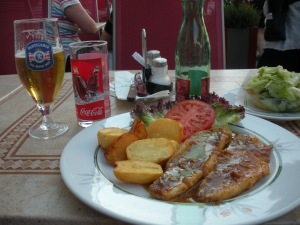 Enough blogging. Now back to work on my last day in Vienna.