Posted on December 23, 2012 by beckyajohnson

For the many of us who believe there aren’t enough biographies about strong women from past generations, Desert Queen: The Extraordinary Life of Gertrude Bell: Adventurer, Adviser to Kings, Ally of Lawrence of Arabia, is an important read. 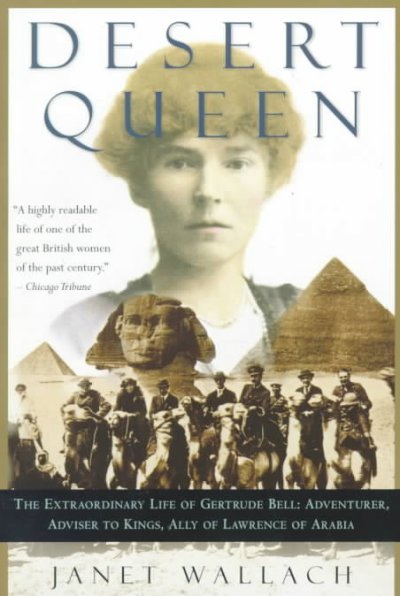 Prior to reading this book, I’d never actually heard of Gertrude Bell, yet her colleague Lawrence of Arabia is practically a household name. Gertrude was a British citizen who lived from 1868 – 1926. She was one of the first women to graduate from Oxford, and one of the first women to hold a British-government appointed position. Late in her career she was appointed as the only British female officer in Mesopotamia, and was closely involved in the creation of modern-day Iraq, including the election of King Faisal as its first leader. In a time when women had few opportunities for career and adventure, she explored remote parts of the Middle East and has a noteworthy archaeologist. One of her final accomplishments was the establishment of the Baghdad Archaeological Museum.

This was one of the most comprehensive biographies I’ve ever read, and at times it was a bit too detailed. In conducting research for this book, it was apparent that author Janet Wallach extensively reviewed Gertrude’s diaries, personal correspondence and news clippings from her day. Not only is the book a timeline of Gertrude’s life, but a lot of her emotions are written into the story. Despite her many professional accomplishments, Gertrude’s personal life was marred by depression and tragedy. Later in life, she would reflect on how she never married, and she frequently wrote about the loneliness she felt. I won’t share any spoilers here, but I will say I was a bit stunned by the ending.

Desert Queen is also a useful read to shed light on the history of Iraq, which I also previously knew little about. It shouldn’t have come as a surprise that even 100 years ago the imperialists’ quest for oil played an important role in determining the nation’s boundaries and leadership.

Although this isn’t a quick read, it’s one I would recommend for fans of biography and history.