Living in Las Vegas, I occasionnally have the urge to partake in a piece of all the kitsch the city offers. Just off the Las Vegas Strip, in the north part of town, we have a 27-year-old baseball stadium. In childhood, I used to frequently go to games with my family, and since moving back here I’ve gone to about 2 games per year. Tickets are far cheaper than major league games (tickets here range from $9 – $14), so one would think this to be a relatively inexpensive night out.

Like many sporting franchises, the Las Vegas 51s offer various promotions throughout the season. Monday is dollar menu night, Tuesday is bobblehead night, Thursday is dollar beer night, and occasionally they have fireworks on the weekends. This year, the bobbleheads featured local entertainers – Rita Rudner, Gordie Brown, Carrot Top. Several years ago bobbleheads of our famous mayor, Oscar Goodman, were given away, featuring him dressed as Uncle Sam, in a baseball uniform, and in a business suit. Those who know me well know that I am not into “stuff,” but somehow I was intrigued by this year’s Holly Madison bobblehead night, featuring her in a Peepshow outfit.

Holly Madison must be super popular in Vegas because this was her second bobblehead night of the year. In April, fans could get her dressed in a baseball uniform. For those who don’t live in Las Vegas or who don’t know who Holly Madison is, she has played one of 80-something Hugh Hefner’s (of Playboy fame) girlfriends on television and she is currently starring in the Peepshow at the Planet Hollywood Hotel & Casino on the Las Vegas Strip. My husband and are thinking of going to Peepshow for our first anniversary. How can one get any more Vegasy?

“She’s here!” the woman behind me excitedly exclaimed. We were later to learn that they too had come that evening especially for the Holly Madison appearance. Yes, she was there to throw out the first pitch and sign autographs. I happened to see one of the bobbleheads she’d signed as one of her adoring fans walked by. Was Holly trying to be funny when she scribbled her name across her likeness’ crotch? 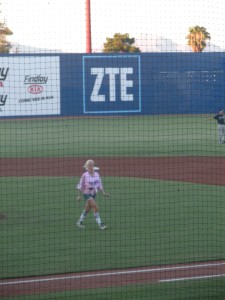 Poor Holly Madison. She’s pretty attractive in real life, but the bobbleheads didn’t do her justice. They are a bit too manly, and Peepshow outfit aside, don’t really look much like her. One of our bobbleheads will be given to Goodwill to hopefully make some little kid happy and the other one was placed on our bookshelf next to our Jerry Garcia doll.

Now for the part of the evening where all our money went – concessions. It would have been better to have eaten at home before the game or gone to happy hour at the 777 Restaurant and Brewery at Main Street Station for $2 pints of microbrews and generous $4.50 appetizers. At the game, dinner was a 12-oz. cup of Gordon Biersch Marzen microbrew, garlic fries, and a bottle of water. The beer was good (not worth the $6 though), but my garlic fries had zero garlic on them. The white stuff you’re seeing in the photo below is parmesan cheese. A mean trick for this garlic lover! I was so sad that I had to console myself after the second inning with Ben & Jerry’s ice cream. But as my husband and I noted, after his third alcoholic beverage of the night, what else are you going to do at a baseball game besides eat and drink?

As for the baseball game, my husband and I decided we don’t have the attention span for sporting events. We’re more about the people watching and making up silly games to play such as “among the people here, who would survive an apocalypse and why?” The game was actually exciting as far as baseball goes. We got to see a runner caught in a “pickle,” some little-league style errors, and I learned that no matter where we sit in the ballpark, we husband is terrified of getting hit by a foul ball. In the bottom of the 9th inning, with the 51s down by three runs and the bases loaded, they might have come back and won. Not this time.