Posted on February 21, 2013 by beckyajohnson 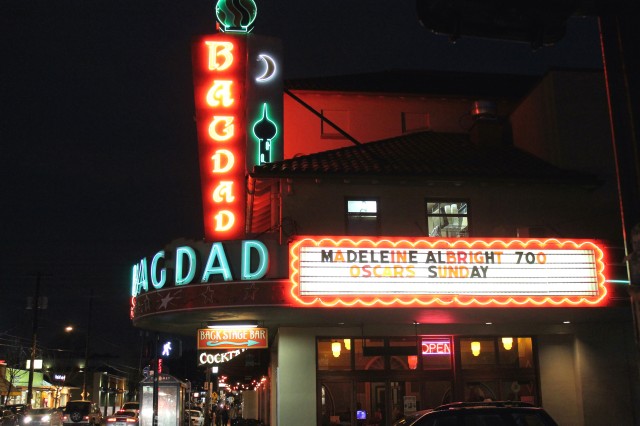 Last night my husband and I went to see former Secretary of State Madeleine Albright speak at the historic Bagdad Theater & Pub in Portland. She was in town promoting her fifth book Prague Winter: A Personal Story of Remembrance and War, 1937-1948, which was released in paperback earlier this week.

In her introduction of the speaker, Maria Wulff, President of the World Affairs Council of Oregon indicated that Secretary Albright had twice before spoken at the Bagdad — in 2002 and 2008. She was happy to be back, as it was “the coolest place she’d ever played.” My husband and I were also happy about the choice of venue. Where else can you sit back with a pint of craft beer and a slice of pizza while listening to a woman who helped paved the way for women in international relations careers?

Luckily, we bought our tickets in early January because the event sold out several weeks ago. Portland is truly an internationally-minded, literary town. We arrived 30 minutes before the “show” and managed to score a pair of seats together in the back row.

The event was set up as an interview between Secretary Albright and Ms. Wulff, and largely focused on the content of Prague Winter. I haven’t yet read the book, but a copy was included in the price of admission, so I hope to read it and review it soon.

Whereas Albright’s earlier books largely dealt with her career, Prague Winter is about her childhood, in which she acknowledged she wrote because she “needed to find out more about my own family story.”

She was the daughter of a Czech diplomat, born in Prague in 1937, shortly before the onset of World War II. When the Nazis occupied Czechoslovakia, Albright and her family fled to London, and ultimately to the United States. She grew up Roman Catholic, and converted to Episcopalian when she got married. Only when she was 59 years old, shortly before she became Secretary of State to President Bill Clinton, did Albright learn that her family was of Jewish descent. According to Albright, “It’s one thing to find out you’re Jewish, and another to find out so many members in your family died in concentration camps.”

Throughout their conversation, Albright and Wulff weaved the personal and the political/historical. There was much talk about World War II, and Wulff referenced a part of Prague Winter where a high-level Nazi is assassinated as reading “like a thriller.” Wulff asked how Albright’s own history influenced her work in confronting ethnic cleansing in Bosnia in the 1990s. Albright praised the United Nations International Criminal Court for its ability to place guilt individually, rather than collectively, while also questioning whether large, powerful countries had the right to make decisions about smaller countries without their involvement.

Albright expressed her current support of immigration reform. “I know this may sound self-centered,” she said, “but America’s really gained from its immigrants.”

During a brief period of Q&A, where audience members could submit questions in writing, Albright was asked what she though of John Kerry’s appointment as current Secretary of State, and whether she thought Hillary Clinton would run for president in 2016. She was also asked why the United States chose to intervene in Bosnia, but not in Rwanda — a question I am sure she is asked often. Nobody ever asks why the U.S. chose to intervene in Afghanistan and Iraq, but not during the Second Congo War and subsequent Kivu Conflict — although it has been the deadliest war since World War II. Is it because Americans benefit from cheap conflict minerals in their iPhones and MP3 players?

For those who live in the Portland area, Powell’s Books has an interesting upcoming line-up in its Arts, Culture & Sciences book series, including food activist/journalist Michael Pollan at the Newmark Theatre on May 14 to talk about his latest book Cooked: A Natural History of Transformation. The World Affairs Council of Oregon is also hosting the 2013 International Speaker Series this spring, featuring paleoanthropologist/ environmentalist Richard Leakey talking about climate change and the road to human extinction on April 25 and His Holiness The Dalai Lama speaking to what is sure to be a sell-out crowd at the Memorial Coliseum on May 11. Although tickets to these events are much more expensive than the $16 it cost to see Secretary Albright, the International Speaker Series is fortunately now a part of the Arts for All program, making such events accessible to certain low-income individuals.