Posted on January 8, 2012 by beckyajohnson

I’ve previously attended several book launches, but never have I personally known the author. That is until last night’s book launch party for Jake Elliot’s novel The Wrong Way Down at Elements Kitchen & Martini Bar. 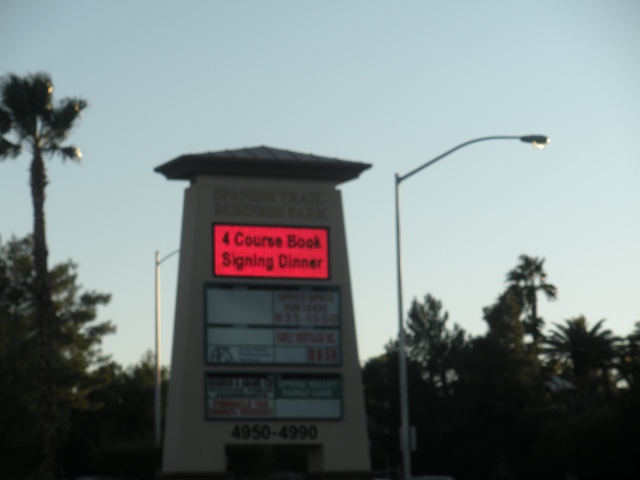 I am generally not a frequent reader of fantasy fiction, but The Wrong Way Down is an enjoyable read. The beginning of the novel is a bit reminiscent of The Da Vinci Code in its style of writing. Two thieves break into a remote monastery, kill a priest and steal a sacred artifact. One thief gets away with the artifact, the other thief is caught. Co-protagonists Popalia and Wynkkur set out on a journey to take the thief to the garrison for punishment and to recover the stolen artifact, but their adventure doesn’t go as well as planned…

The story is great both for the depth of its characters and for the excitement of the storyline. Oftentimes when I read male novelists, I am disappointed by their portrayal of female characters, but this is not the case with The Wrong Way Down. The young priestess Popalia is strong-willed and adventurous, and antagonist Katia is a foul-mouthed bully who puts up a strong fight. There is enough action in the book to move the plot along at a good pace, and the author has gone to noticeable lengths to develop and describe the cultures and religions of both clans of elves and tribes of humans. The only downside of the book is that the editing is not spot-on, and there are dozens of typographical errors. This doesn’t take away from your enjoyment of the story, but it’s a bit burdensome especially if you’re an editor in your day job.

Lucky for me, the book launch was at my favorite restaurant in Las Vegas — Elements Kitchen & Martini Bar. We were treated to a delicious 4-course dinner and libations. Elements is known for their extensive martini list with over 400 selections, and last night’s signature cocktail was the “Root of All Evil” — a root beer martini made with vodka.

I’m looking forward to the release of Jake Elliot’s second novel later this year. He’s planned for a nine-book series.

1 Response to The Wrong Way Down Book Launch Party