Posted on March 3, 2011 by beckyajohnson

As gas prices soared throughout the country, my husband and I embarked on a 8 day road trip from our home in Las Vegas, NV through Arizona, New Mexico and Texas. While the main reason for our trip was to attend a friend’s wedding in Fort Worth, we encoutered many crazy activities along the way. Here is our (partially) illustrated account plus some recommendations on things to see, do and eat in the region.

I love exploring new road food places, and we decided from the beginning that we would avoid eating at corporately-owned restaurants whenever possible throughout our trip. Our first day we drove along the stretch of I-40 from Kingman, Arizona to Tucumcari, New Mexico and ate at 2 great casual eateries.

In Flagstaff, Arizona, not far from the NAU Campus, we ate lunch at East Coast Deli & Grill. When you exit the I-40, there’s a slew of fast food and restaurant chains. But if you drive about 1 mile into town, you’ll find several indie restaurants in a non-descript strip mall. 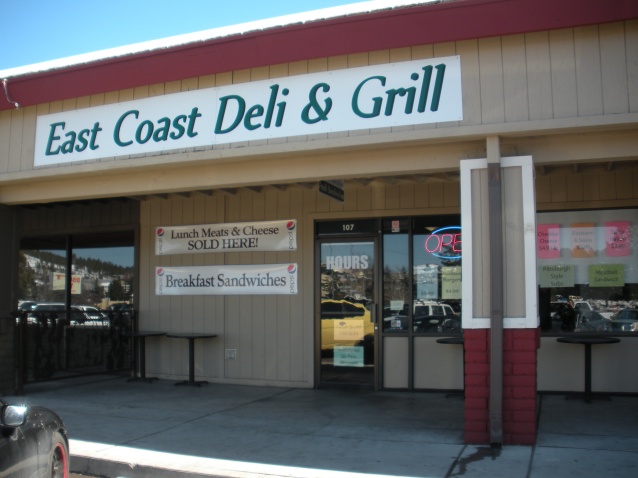 Sandwiches come in 4″, 8″ or 12″. Chips and other sides are at an additional cost. As a plus, their beverage selection features all-natural cane sugar sodas. I recommend getting your sandwich “Pittsburgh-style.” It will come topped with French fries, tomatoes and cole slaw. 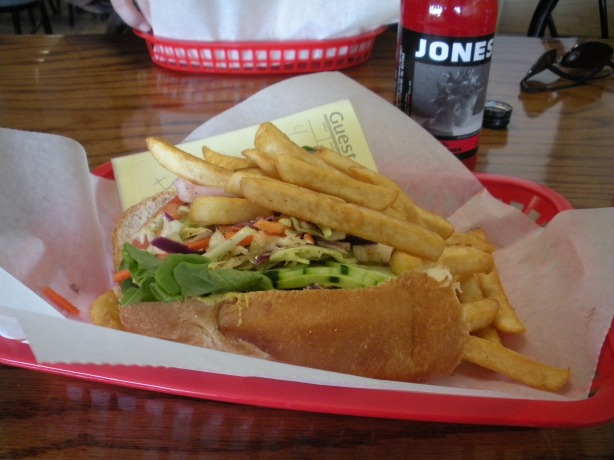 For dinner, we again found a great restaurant just 1 mile off the I-40 – this time in Albuquerque’s Old Town. Take the Rio Grande exit and drive south. Casa de Fiesta Mexican Food is located off S. Plaza street in the Old Town. 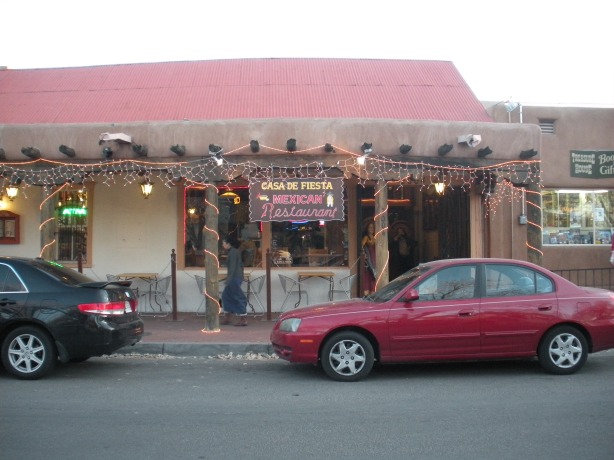 A fun atmosphere, margaritas with generous amounts of tequila and tasty regional specialties make this restaurant worth a visit. I went with the Wednesday dinner special: a stuffed sopapilla with refried beans topped with green chile sauce. Also a New Mexico tradition, you get additional sopapillas to top with honey for dessert. 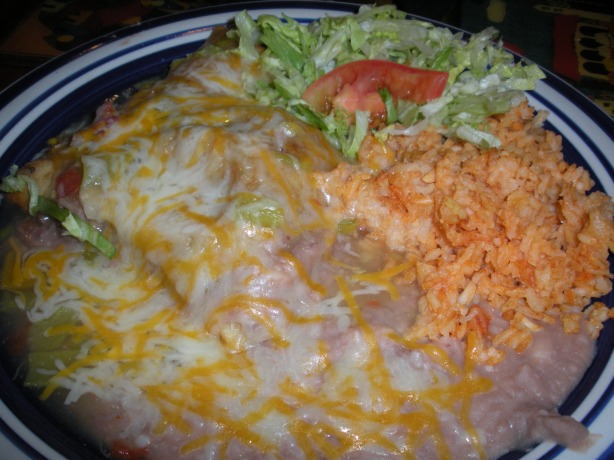 Driving along the I-40 for hundreds of miles, we kept seeing signs for “Free 72 oz. steak” in Amarillo, Texas. While neither of us was particulary interested in attempting this feat, we did have to stop at the “World Famous” Big Texan Steak Ranch for a photo shoot. 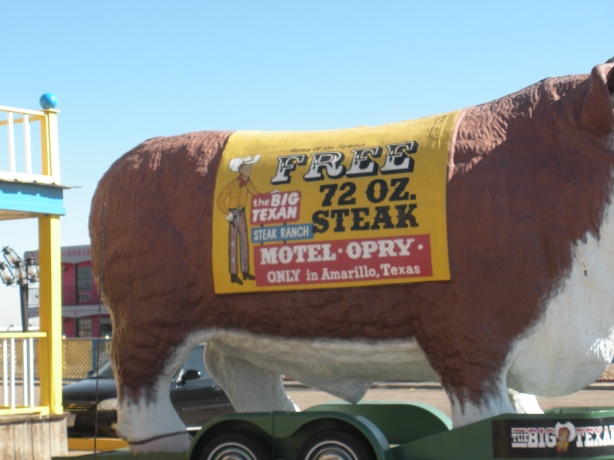 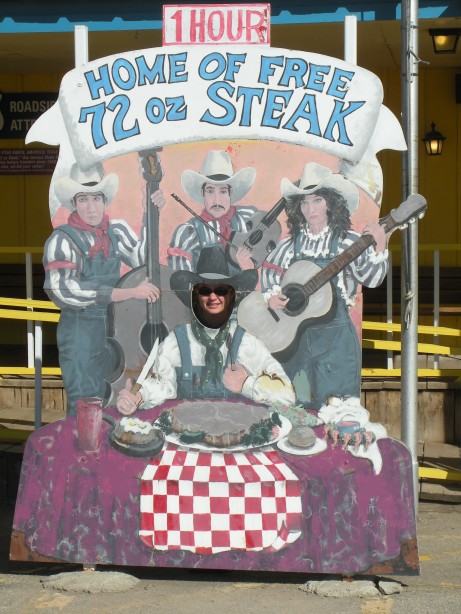 Once in the Dallas/Forth Worth area, we spent 2 days catching up with friends (my husband lived in the area for about 10 years before we met). While there, we also made a visit to the Kimbell Art Museum in Fort Worth. 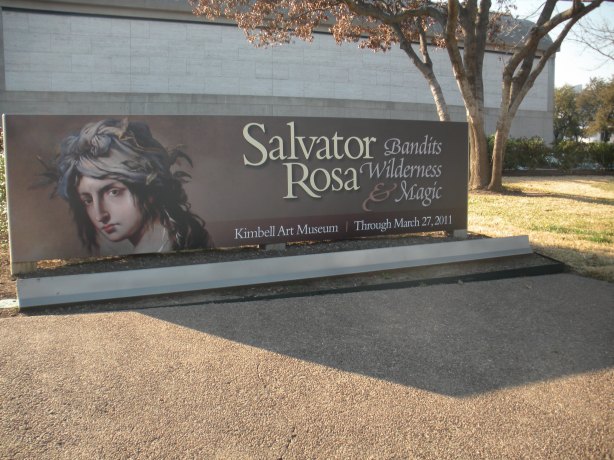 The museum is one of the smallest I’ve been to in a major city (aside from the now extinct Las Vegas Art Museum), but it’s FREE and worth a visit if you have a free afternoon while in the area. There’s several galleries featuring a mix of pre-Columbian artwork, paintings and sculptures from lesser known European artisits, and a few early works from notable artists such as Michaelangelo and Caravaggio (the Michaelangelo painting on display was painted when he was only 13!).

They also had a special, temporary Salvator Rosa exhibit, which you could view for $8 a ticket. While I took art history in college, Salvator Rosa was one Italian Renaissance artist I’d never heard of. I imagine it was hard to compete with the Michaelangelos, Boticellis and Caravaggios of the day, and much of Rosa’s dark themes were more reminiscent of Francisco Goya than the religious themes prevalent of the day.

After a few days in DFW, we headed 3 hours south to Austin, Texas. Neither of us had been before, and we were looking forward to seeing the “other side” of Texas. And while I am on the subject of Texas travelling, here are a few of my travel tips:

1. While driving in Texas, make sure you know the small towns you’ll come across on the way to your larger destination. For example, although Austin is the state capital and only a few hours from Dallas, we never saw a sign for Austin until we had passed Waco (halfway between the cities). Likewise, we didn’t see any signs or distances for San Antonio until we reached Austin.

2. Don’t drink the water in Dallas. It tastes like dirt. Unfortunately bottled water in restaurants is also hard to come by. Sweet tea is a popular alternative. However, tap water in other parts of the state did meet my basic taste requirements.

So during our 2 days in Austin I had 2 goals: (1) to listen to live music in the “Live Music Capital of the World and (2) eat some good ol’ Texas barbecue.

Finding live music is not hard to do, especially if you’re in the Historic Sixth Street District.  We stopped in a bar called Paradise that had no cover and a great-sounding band. 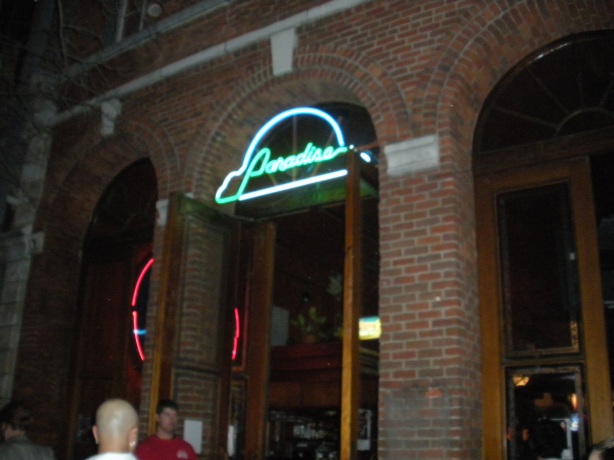 We opted for the $2 “mystery beer.” The waitress admitted she had no idea what the current beer on tap was, but generally a local microbrew is featured. The beer was not bad, but the food was only so-so. 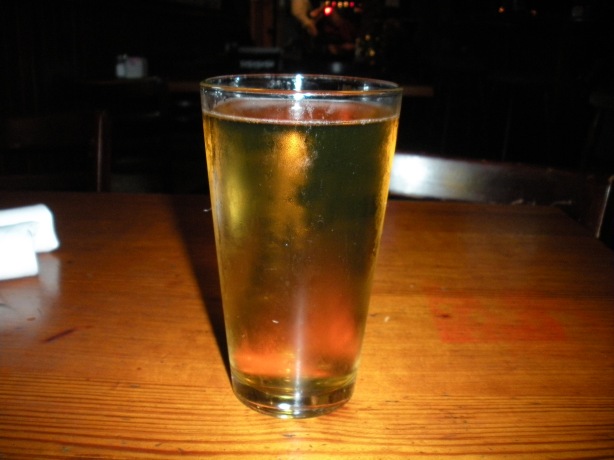 The featured band of the evening was “Midnight Ramble.” They were a rock-blues blend and played mostly covers from artists such as Stevie Ray Vaughn, ZZ Top, and Jimi Hendrix. They were just the type of band we were looking for. 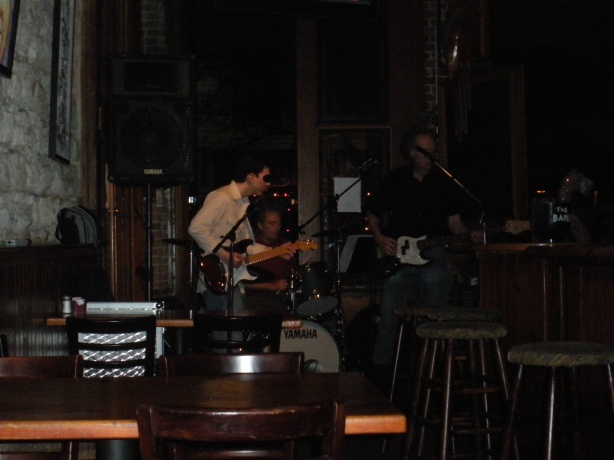 Day 2 in Austin we did some sight-seeing in the downtown area. Our first stop was the Museum of the Weird. 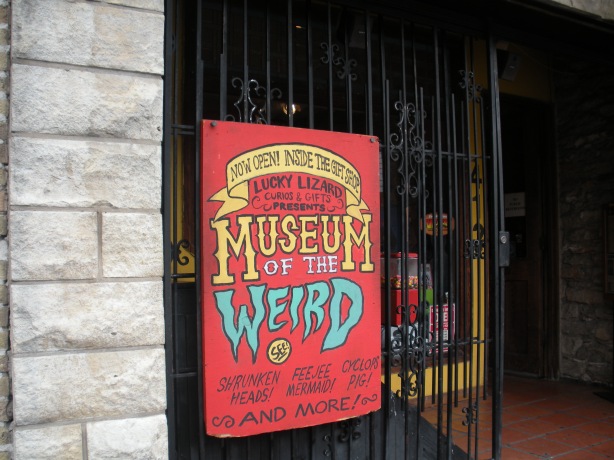 As Austin has the motto ‘Keep Austin Weird,’ we figured this was a must-see attraction. Tickets are only $5 per person (free if you buy a t-shirt) and you get to see such things as shrunken heads, a naturally mummifed cholera victim, trigger finger of Pancho Villa, and possible alien skull (you decide!). My favorite artifact was the mummified Fiji mermaid. 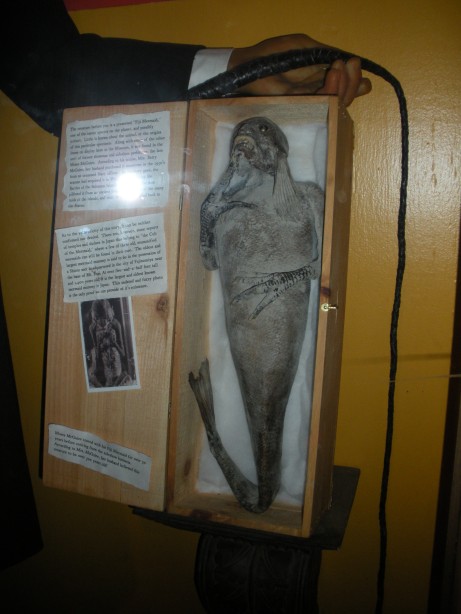 We did find some good ol’ Texas barbecue at Stubb’s on Red River Street. 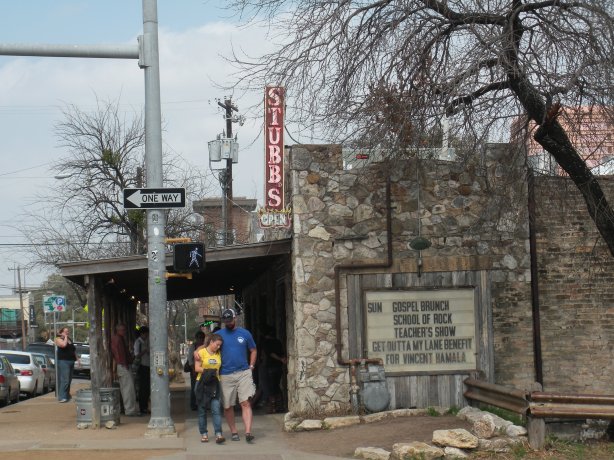 They also have live music on site, although we arrived a bit too late. I tried their barbecue chicken with mac & cheese and serrano-cheese spinach and all was super delicious. My husband said the beef brisket was the best he’s ever had. They also have a good selection of microbrews. 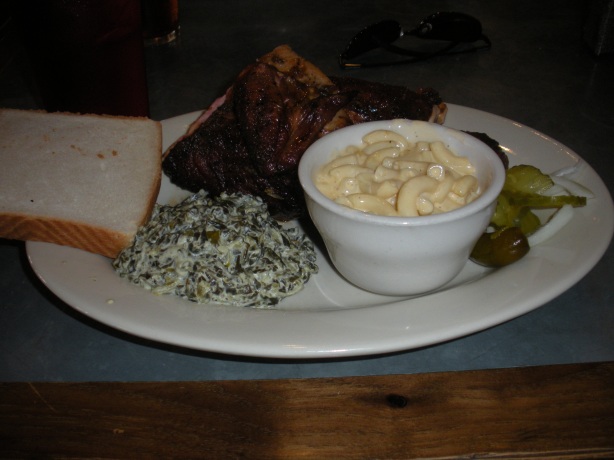 While in Austin, we stayed at Habitat Inn & Suites, which I highly recommend. They’re an award-winning “green” hotel. Although they’re about 6 miles from downtown, they were far cheaper than comparable hotels in the area and the rooms were quite nice with king-sized beds, full kitchens and lounge areas. Plus they have a nightly happy hour with free beer and wine plus a full breakfast buffet each morning. And their breakfast buffet features macrobiotic selections (plus traditional items if you’re not so adventurous). 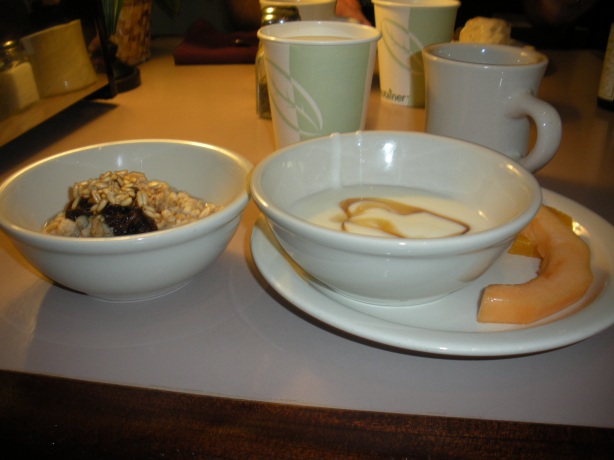 After our Austin adventure, we headed on to Carlsbad Caverns National Park in southeastern New Mexico. With your $6 per person entry fee, you have access to the ‘Big Room’ of the cave, which for most of the visitors is the main attraction. While there is elevator access to the cave, we chose to hike in through the ‘Natural Entrance.’ It’s now a paved trail, but it’s 1.25 miles with a 740-foot descent which makes it incredibly steep. But it’s ever-so-worth-it despite being incredibly sore the next day. 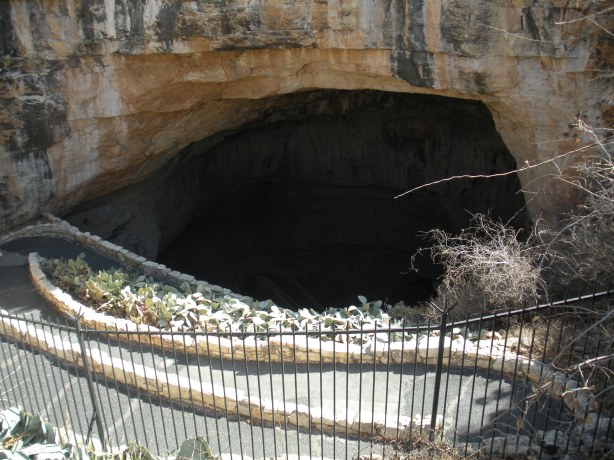 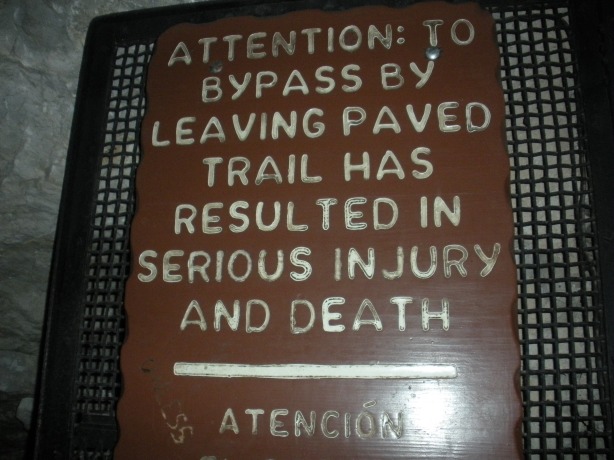 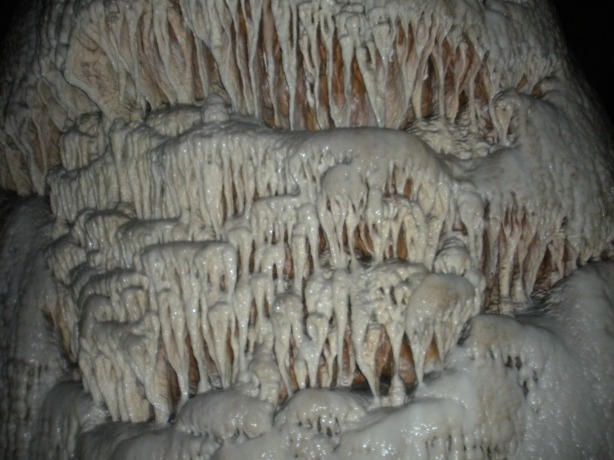 The highlight of our trip to Carlsbad Caverns was definitely our adventure tour to Lower Cave. We booked this ranger-guided tour several weeks in advance, as they only allow up to 12 people on the tour and it’s only offered once per day. This was one of several adventure tours offered, and was described as ‘moderately strenuous.’ Once you’re in the cave, it’s not so difficult, but the tricky part is descending the 90 feet from the Big Room. You’ll have to rappel down a 15-foot slope plus descend a series of 3 ladders another 70 feet. 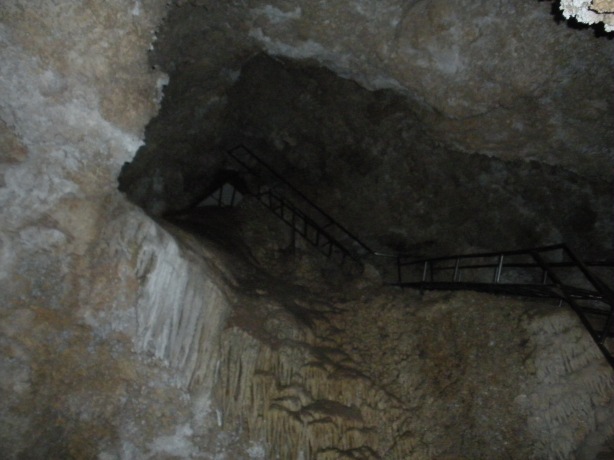 Lower Cave is truly a ‘wild cave’ and is not kept lit by artificial lighting the way the Big Room is. We navigated via lighted headlamps, and during a portion of the tour we also got to experience complete darkness. Highlights included cavern pools, cave pearls, interesting formations, and this stalagmite that’s estimated to be 1.3 million years old. 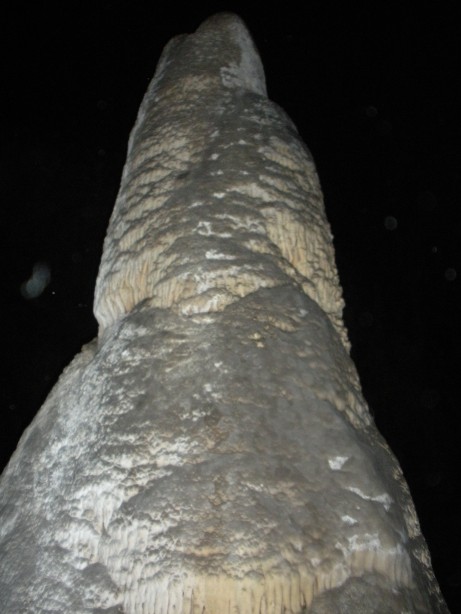 Heading back to Las Vegas the following day, we stopped for one last road food meal: Eagle Cafe in Gallup, New Mexico. It’s just off the I-40 off Historic Route 66 and has been in operation since 1889. 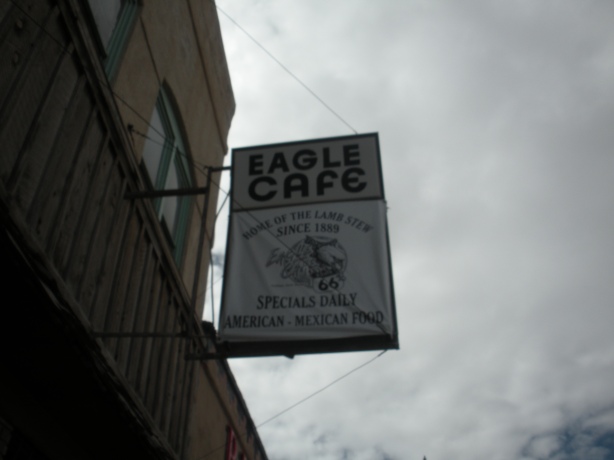 This was our last opportunity for New Mexican cuisine and I wanted to try my latest discovery in local cuisine. When you order New Mexican food they’ll ask if you want red or green sauce, but according to our tour guide at Carlsbad Caverns, many locals ask for their sauce to be ‘Christmased’ – with both red and green sauces.

Now it’s back to work so I can save up money for our next adventure.