Posted on December 4, 2010 by beckyajohnson

Prompted by an advertisement on Facebook, this year I signed up for Amnesty International’s Annual ‘Write for Rights’ Global Write-a-Thon.

According the Amnesty’s website, Write for Right is the largest letter writing campaign in the world. From December 4th – 12th, people in over 50 countries will be writing letters to political leaders, to ask for the release of prisoners of conscience, to seek justice for human rights offenses, and to ask protection for people at risk of human rights abuses.

What is a prisoner of conscience, you might ask? These prisoners are generally peace activists who have been imprisoned by exercising their rights to freedom of expression, freedom of speech or for organizing peace rallies. In most cases, you’re asking leaders of foreign governments to uphold their own constitutions, or the commitments they’ve made by signing onto international human rights treaties. Examples of prisoners of conscience from the past, who have now been released, include Nelson Mandela and Aung San Suu Kyi.

Amnesty’s goal is to have 350,000 letters sent during this year’s campaign. At the time I write this, just over 235,000 letters have so far been pledged to be written. You can sign up to participate on their website, and then they will send you an e-mail linking your to their resource guide with backgrounds on particular human rights abuse cases that are targeted this year, tips for writing letters and sample letters. You can participate in a letter writing event with other activists that are taking place in cities across the globe or choose to write from the comfort of your home.

Examples of letters that can be written this year are to demand the release of political prisoners in Iraq, Indonesia and China; to encourage the United States House of Representatives to pass the Global MOMS Act for improved access to maternal health; to call on the president of the Democratic Republic of the Congo to address how rape is being used as a weapon of war in his country; to call for safe and humane housing for Roma people in Romania; and to protect the safety of a women’s rights defender in Guatemala. 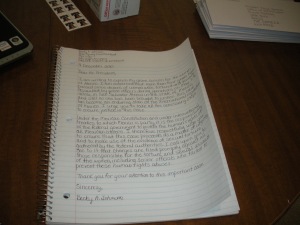 My letter to the President of Mexico, asking for him to seek justice in the case of over a dozen women in Atenco who were tortured and sexually assaulted by police officers

The cool thing is that letter writing has actually proven to be successful in past campaigns. On another Amnesty web page, you can read about these successes and political prisoners who have been released in years past following an international outcry.

For those of you who are like me, and may not be able to financially help people in need this holiday season, the Write for Rights campaign is a way you can make a difference for less than $10 (the only cost is really the postage stamps). If you don’t have much time either, even writing one letter can make a difference.

My letters ready to be sent, sorted into piles for domestic and international addresses.