My husband and I just spent a long weekend in Reno, where we’re debating moving to in the distant future. While in Reno I had to try lunch at Louis’ Basque Corner because I had read about it in several books, and being the anthropologist that I am, I’m always up for cultural dining experiences.

Northern Nevada has its share of Basque people, who emigrated from southern France and northern Spain over 50 years ago to work as sheepherders. Louis’ Basque Corner has served generous-portioned lunches and dinners in downtown Reno since 1948. At the corner of 4th and Evans Streets, you can’t miss it. 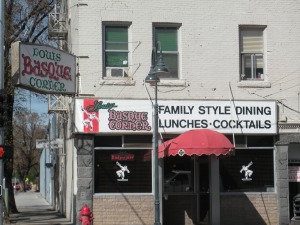 The restaurant is set up with long tables good for family-style dining. We sat down at a table with another couple who were just finishing their meal. They turned out to be of Basque heritage, were really friendly, and gave us the heads up on Basque restaurants and festivals throughout the state of Nevada. 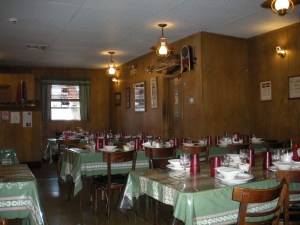 Our waitress was on top of her game and asked if we would like a cocktail as soon as we sat down. Although I was new to Basque dining, I had done my research ahead of time and ordered a Picon Punch. I’m not sure what’s in it, but it was sort-of similar to a Long Island Iced Tea and packed a powerful punch. The other man at our table commented that if we were to have three of those we would be under the table. 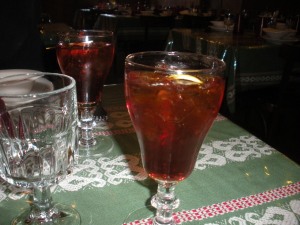 We went with the 3-course family style lunch and were quite pleased. For the first course we had New England clam chowder and bread. Our waitress also brought out half a carafe of their house red wine – included in the meal! 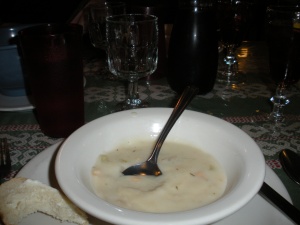 The second course was their house salad (loved the salad dressing) and Basque beans. The beans had Chorizo in them, but the pieces were large enough that I was able to pick them out (I don’t eat pork or red meat). My omnivorous husband, on the other hand, thought the beans were the best part. 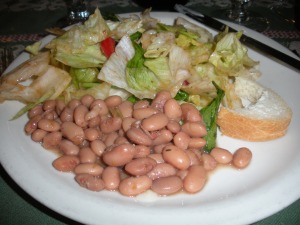 They had about  a half-dozen items to choose from for the main course — including oxtails, tripe, cow thymus gland (sweetbreads) and fish. I chose Chicken Basquaise, four pieces of chicken on the bone with a tomato, green pepper and garlic-based sauce. I wasn’t disappointed. 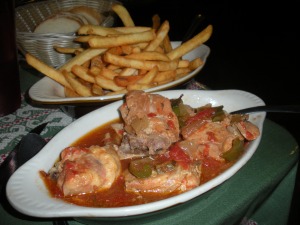 My husband chose the Saturday lunch special – chorizo and eggs. Both meals were accompanied by French fries with just the right level of crunchiness and saltiness. We were so full that we ended up taking half our food home. I’m told that dinner at Louis’ can be 6-7 courses and I can’t imagine eating twice as much food! 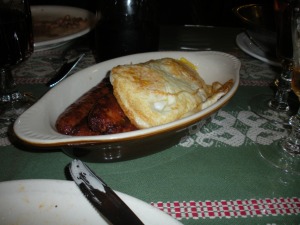 The best part came when our check was delivered and we learned the 3-course lunch was only $11.65 per person including wine! With our pre-lunch cocktails, the entire bill was only $33. The food and value were great, and this is definitely a place we would visit again. If we end up moving to Reno, we might just become regulars.